Thursdays are always a really long day of the week for me. Since I’m a pastor, Sunday feels like the natural beginning to my week.  By the time I get to Thursday, I am tired and drained. That’s why I’m excited to join with a group of blogging friends in order to offer you a weekly devotional which will be posted every Thursday. We are calling the series, “His Encouragement.”

It is my prayer that these words of encouragement inspired by scripture will help to carry you through the rest of your week  My prayer is that this weekly series will be a much needed of reminder that God loves you.

“The Spirit of the Sovereign Lord is on me,
because the Lord has anointed me
to proclaim good news to the poor.
He has sent me to bind up the brokenhearted,
to proclaim freedom for the captives
and release from darkness for the prisoners…

to bestow on them a crown of beauty
instead of ashes,
the oil of joy
instead of mourning,
and a garment of praise
instead of a spirit of despair.

True Confession: I Love to Watch the TV Show Hoarders

True confession time: I love to watch the television show Hoarders. There was once a time when I had almost 50 episodes of the show saved on our DVR. Ironically, you could say that I was hoarding episodes of Hoarders!

I’m ashamed to admit it because the reason I like to watch Hoarders is sinful. I enjoy sitting there on the couch in the smug superiority of my living room and looking at the chaos of other people’s homes. Seeing other people’s messes makes me feel better about my own home.

(Note: I really do feel guilty about this. Jesus told us that we need to take the plank out of our own eye before we deal with speck of dust in our neighbor’s eye (Matthew 7:5). Still, I also believe that there is value in the act of confession. and mutual accountability I am a work in progress and the Holy Spirit is still working on my heart!)

Trying to Fill a Void in Our Hearts

On a recent episode of Hoarders, one of the psychologists said something that really struck a nerve with me. On this particular episode, a woman had literally barricaded herself inside her home with her belongings. It was almost impossible for anyone to get in or out of the house.

Every room of the home was filled with stuff. There wasn’t even a walkway between the rooms. The piles of objects were stacked over six feet high and completely covered the windows. Even the furniture was buried under a mountain of stuff. Instead of sleeping in a bed, the woman slept on a mountain of her own belongings.

In a private moment, the psychologist confessed to the cameraman that it was one of the worst cases of hoarding that she had ever seen.

As the psychologist and the woman worked together, the woman confessed that she was still dealing with a great deal of grief over the loss of a loved one.

“That makes sense,” replied the psychologist, “but don’t you see what you are doing? You’re literally building a barricade around yourself. You’ve built walls around your heart and you are trying to fill a hole that just can’t be filled with stuff.”

Cleaning Out My Basement Reduced Me to a Puddle of Tears

I felt convicted by the words of the psychologist. I will admit, that I have a tendency to cling to objects. I am incredibly sentimental and right now our basement is overflowing with all types of random objects. I woke up the next morning determined to begin cleaning out my basement!

At first, everything went really well. I began sorting through boxes, disposing of garbage, and selecting items to donate to our church’s upcoming rummage sale. Then, I opened a box that I hadn’t seen in years. When I opened the box and saw what was inside, I began to cry.

As I pulled out the items one by one, I started to cry harder and harder. First, I pulled out a little Russian nesting doll that had sat on the shelf of my childhood home. Next, I found a dragon statue that my grandparents had once given me as a Christmas present. Finally, I started to pull out the small pewter animals and automobiles that my grandfather had collected.

At last, when I came to a small pewter train mounted on a tiny railroad spike, I sat on the floor, put my head on my knees, and just sobbed. I cried a loud, ugly, cry right there in the basement while the chihuahua and the cat sat there watching me.

(Note: Tinkerbell was trying to be comforting but I’m fairly certain that the cat was judging me.) 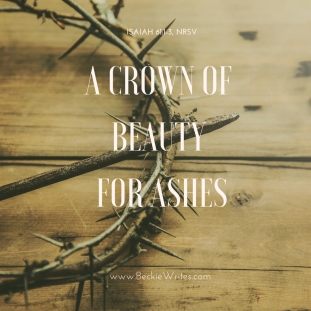 I clutched the small pewter train mounted on a tiny railroad spike and sobbed. “How sad,” I thought. “All the items in the world can’t bring my grandfather back. At least he is in heaven.”

I knew that as hard as I searched for my grandfather among his belongings, he was no longer there. As much as I take comfort in the fact that he is in a better place, my heart is still full of the pain of that loss.

Sometimes the Holy Spirit whispers to us…

What is it that I’m supposed to remember about nails?”

As I continued to cry, my other hand absentmindedly went to my neck and began to play with the chord of my necklace. I always wear a cross and that particular morning I was wearing a small cross made of nails that a member of my church had given me.

I wrapped my fingers around the cross and I felt my eyes grow wide. All of a sudden, it all came together in my mind:

A Crown of Thorns

This week, I am encouraged by these words from the prophet Isaiah. It was the scroll of this very prophet from which Christ read when he began his earthly ministry.

In Luke, Jesus reads from the scroll of Isaiah, “The Spirit of the Lord is on Me, because He has anointed Me to preach good news to the poor. He has sent Me to proclaim deliverance to the captives and recovery of sight to the blind, to release the oppressed (Luke 4:18).”

In the past, I confess that I have struggled with this text, especially the section about recovery of sight to the blind.

Isaiah promises that God will exchange our ashes (an ancient symbol of mourning and grief) for a crown of glory.

Could the prophet Isaiah have imagined how gloriously God would keep God’s promise?

Who could have ever imagined that a crown of thorns could be so beautiful?

When it comes to sorrow- no one knows it better than God.

When it comes to pain, no one understands it better than Christ.

My grandfather wasn’t in the box in the basement- he is in heaven!

Jesus wasn’t in the tomb- HE IS RISEN.

Please be sure to check out the other great bloggers involved in the His Encouragement weekly series!