This post is part of the weekly series, “His Encouragement: Thursday Thoughts to Strengthen Your Soul.” 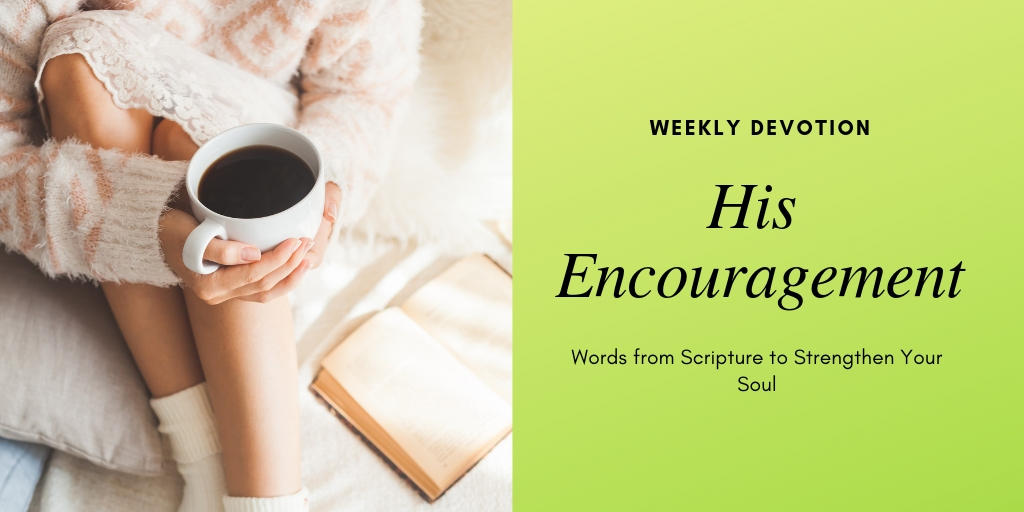 “Teacher,” they said, “Moses wrote for us that if a man’s brother dies and leaves a wife but no children, the man must marry the widow and raise up offspring for his brother. 29 Now there were seven brothers. The first one married a woman and died childless. 30 The second 31 and then the third married her, and in the same way the seven died, leaving no children. 32 Finally, the woman died too. 33 Now then, at the resurrection whose wife will she be, since the seven were married to her?” (Luke 20:28-33, NIV)

November is a busy month for me. It is National Novel Writing Month, and therefore I am hard at work on my debut novel Cinnamon Rolls and Running Shoes, which is currently available in serial form from Channillo.com and is scheduled to be available in paperback in the spring. I’m also super excited about my latest book, The United Methodist Church and Disability, which will be published on November 25th.

November is a big month, but in the midst of my busy schedule, it becomes even more important to place Christ as the center of my life. One way I do this is by engaging in the spiritual discipline of constantly reading and studying God’s Holy Word. This past week, I delved deep into a story that comes from Luke 20. I was able to tease out some fascinating connections that, while not new or groundbreaking, offered my heart comfort and drew me closer to God’s grace. Here is what I learned. I hope you find it encouraging as well.

Big Questions About the Resurrection

Let’s begin by playing a game. I would like to encourage you to pause after reading each of the following three questions and to consider your own answer:

Depending on your age or your own life experience, you might answer these questions very differently. When I was a child, I pictured the Holy Ghost like a friendly version of Caspar; however, as an adult, my opinions on these matters have changed. As I’ve grown older, my ideas have matured. I know picture the Holy Spirit as a dove or as warm sunlight.

The Sadducees did not believe in the resurrection. They attempted to trick Jesus in order to show that the concept of eternal life was laughable.

In last week’s lectionary reading (Luke 20:27-38), the Sadducees had the opportunity to ask Jesus questions regarding the resurrection; however, when they came to Jesus with their challenging question, they did not ask with pure hearts.  They weren’t truly concerned about the answer. Instead, their main concern was undermining Jesus’s authority. They wanted to prove that belief in the resurrection was silly, so they asked Jesus what they thought was a trick question.

The Sadducees were a group of highly educated religious leaders of the time. They held a great deal of religious authority and they did not believe in the resurrection. Their goal was not only to undermine Jesus, but to prevent other people from believing in Jesus’s teachings.

Only a few verses earlier, another group of religious leaders, the Pharisees, had tried to trick Jesus by asking him about taxes. In Luke 20:20, they had tried to lure Jesus into saying something against Caesar and paying taxes.

Jesus was smarter than the Sadducees. They tried to make belief in the resurrection look laughable, but instead, Jesus just made them look silly.

The Sadducees came to Jesus and asked him a complicated theological  question that they were sure would  stump him. Their goal was to test the authority of Jesus. They remind Jesus that in Deuteronomy, Moses had instructed the people that if a man died, his brother was supposed to marry his widow. In this way, the widow would be provided for in a world where women were not permitted to work outside the home. Also, any children the widow had would carry on the deceased brother’s family line so that it would not die out. This also granted the brother a sort of “life after death,” through the lives of his unborn children.

The Sadducees provide Jesus with a hypothetical situation. They ask him to consider the following thought experiment: “Now there were seven brothers: the first married and died childless; then, the second and the third married her, and so in the same way all seven died childless. Finally, the woman also died. In the resurrection, therefore, whose wife will the woman be? For seven had married her (Luke 20:29-33).”

Jesus’s Answer to the Sadducees

Jesus’s answer to the question was incredibly clever. The only books that the Sadducees believed held scriptural authority were Genesis, Exodus, Leviticus, Numbers, and Deuteronomy. Jesus answers them with a story taken directly from the book of Exodus.

The answer that Jesus gives is rooted in relationship. The Sadducees has attempted to use scripture to demonstrate that the belief in the resurrection was ridiculous. Jesus answers them, using one of the only texts by which the Sadducees set religious authority.

In Exodus 3, when Moses encounters the burning bush, he asks God, “Who shall I say sent me?” God responds,

“I AM WHO I AM… say to the Israelites, “The LORD the God of your fathers- the God of Abraham, the God of Isaac and the God of Jacob- has sent me to you. This is my name forever, the name you shall call me from generation to generation (Exodus 3:14-15).”

God is the God of Everlasting Life

Using an excerpt from one of the only books that the Sadducees recognize, Jesus illustrates that God is a God of relationship. God is a God of love.  The Sadducees thought that they could use scripture in order to make the idea of eternal life look ridiculous. Instead, Jesus used scripture to show them that God’s love is bigger than we could possible begin to understand and that it is this same love which ensures our continued existence.

From generation to generation, God IS and WAS and ALWAYS will be. God’s love never ends. It is the love of God that makes us new. The sacrificial gift of Christ’s love gives us eternal life.

God is the God of the Living

Some Bible verses are easier to unpack and to understand than others. This week, the selected lectionary text is challenging. It focuses on a question that was meant to trick Jesus. I found great joy in studying this text because in order to fully understand Jesus’s response, one must dig into the Old Testament. The Old Testament is the table upon which the New Testament sits. In order to fully appreciate the promises of the new covenant that Christ offers us, it is important to study the entire Bible.

In today’s world, how often do people stumble over the idea of eternal life? People have such a hard time believing what they cannot see.

How tragic and heartbreaking is it to think that this life is all there is? The idea of eternal life might seem like a complex idea, but in the end, the simple and beautiful truth is that God keeps God’s promises. God has promised to love us. Nothing can separate us from the love of God, not even death (Romans 3:38). As such, I am encouraged this week by the hope that no matter how sad I am when a loved one passes away, I know that we will all be reunited some day in God’s heavenly kingdom as one big happy family. Until that day comes, I will do my best to place my faith in Christ and his everlasting promises.

This post is part of the series, “His Encouragement: Thursday Thoughts to Strengthen Your Soul.”

Now, it’s your turn! What Scripture verse is inspiring you this week? Let me know in the comments below!

Thursdays are always a really long day of the week for me. As a pastor, Sunday feels like the natural beginning of my week. By the time I get to Thursday, I am tired and drained. That’s why I’m excited to join with a group of blogging friends in order to offer you a weekly devotional which will be posted every Thursday.

Please be sure to check out the other great bloggers involved in the His Encouragement weekly series!

1 thought on “His Encouragement: God’s Promise of Eternal Life”

I really am a fan of Audible and as such I am happy to recommend it to you. You can get two free audibooks today when you sign up for a free trial with Audible. Click Here to start your free trial and claim your free audibooks! Also, please be aware that the above link, as well as many other links on this website, are affiliate links. This means that at no additional cost to you, I will earn a small commission that I can use in order to help to offset the costs of running this blog. Thanks so much!
%d bloggers like this: